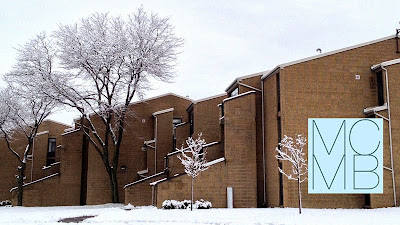 Almost every revolutionary building or artwork was shunned, derided and hated before it was loved and revered. I grew up despising Brutalism and the likes of the Shoreline Apartments. But as I've been studying the art and architecture of the mid-20th century, I have come to understand that we must protect the truly revolutionary until their importance can fully be understood. Anyone who's parked in the lot that was once the Frank Lloyd Wright Larkin Administration building understands that. Take a minute to fill out the petition. Thanks.

The origin of Brutalism is fascinating, and I recommend doing a little research, particularly if you are NOT a fan. Buffalo has a high concentration of buildings in the style, including the convention center, the bus station and the small boat harbor. They are cold, monolithic and devoid of humanity. They were also inexpensive to construct and maintain. The roots of the style goes back to before World War II, but the aftermath of war made the style necessary.
Posted by Jeff Dean at 12:42 PM No comments:

No Telling the Times, the Number of Times 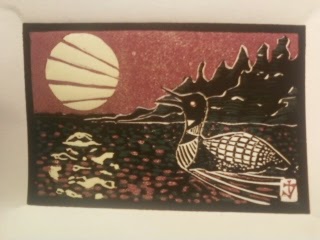 Here we have the completed 4-color reduction linocut "Loon in Maroon" (2015). A remake of an original woodcut made in 2013.

Clearly I've made some strides forward. I learned a lot on this print, and I'm ready to get working on some original stuff after solving a few issues that arose in the printing.

I'm tempted to go back through my entire catalog and redo prints that failed as woodcuts. But what fun is that? Gotta move ahead.

So, of Maroon. I have a link on an earlier post that will take you to a video made for Ken Nordine's "Maroon" on Youtube. You may think you don't know Mr. Nordine, now in his 90s, but you do. He's a well-known voiceover artist, and you've heard him on plenty of commercials. He inspired Tom Waits to begin adding spoken word tracks to his albums, and they have worked together.

His album "Colors" is mindblowing; it actually began as a series of radio spots for a paint company. Here is the poem in its entirety: 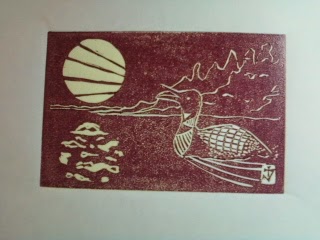 The second color, the eponymous maroon, went down nicely.The foundation colors are important, but you can't really see much going on until the dark colors go down. Usually, the darker colors go on way down the line, but since this is a night picture, the dark comes on quickly.

I'm still getting used to the linoleum. It cuts wonderfully, but it's easy to dent the block around the lines, so I have to keep the tools sharp. I also don't need to cut as deep as with the wood. I also need to refine the jig I use to print, as it's causing crimping of the paper in the corners. These are pretty easy issues to resolve, I think. Right now, I am just having fun doing the work, something I've been missing for a while. It's good to be back.
Posted by Jeff Dean at 6:57 AM No comments: 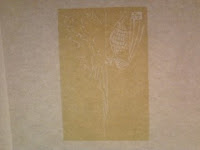 Loon puns are hard. Luckily, the first color was not. I photographed this drying on the clothesline, backlit to show detail. The color is a very pale yellorange. Yes, yellorange. It will comprise the moon and the moon reflection.

Don't strain. The details will be clearer as the darker colors go down.
Posted by Jeff Dean at 6:51 AM No comments: 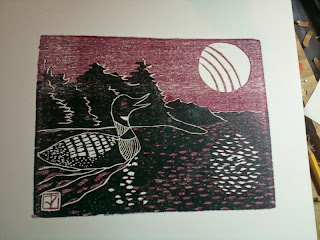 In December 2012, after settling back in Hamburg, I unpacked my studio and set to work on a new woodcut print. The print was inspired by "Maroon," a track off of the sublime Ken Nordine album, "Colors."

So much went wrong with this print, I won't detail it. But I was very unhappy with it when it was done. As you look at it here, you can see that one of my biggest problems was the most common problem -- coverage.

There were three problems affecting coverage here: the grain of the wood (which is such an awesome thing in woodcuts, but has been a nightmare in reduction printing), the grain of the paper, which had way too much texture for this type of printing, and the fact that the paper was like card-stock. Woodcuts fare better when the paper has some give. But it's what I had. And at this point, having just found refuge back in my hometown after a horrible exile in the city, we were scrounging pennies (we're scrounging nickels now, so everything's much better).

But now, 2.5 years later, I want to give it another go using the linoleum I recently purchased. Come walk with me as I redo "Maroon." In the meantime, go check out Ken Nordine's "Maroon" on Youtube!  https://www.youtube.com/watch?v=9pwyjqq2ju4
Posted by Jeff Dean at 10:12 AM 1 comment: 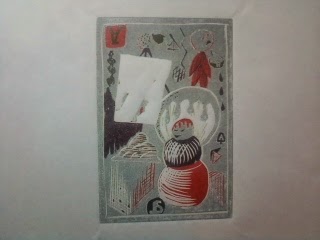 Last week, I received my box of linoleum blocks. I went with the 4x6 blocks. I've been working in 9x7 for the last few years, but I figured I would go back to how I originally started with woodcuts and work my way back up.

This is just goofing around on a block. I used rubber cement to adhere the linoleum to a large block so it would fit in the "chase" I have built for the press. It works like a charm.

What you're looking at here is just some playing around with cuts and colors, to see how the blades work on the linoleum, and especially to see how the ink lays down, layer upon layer.

I'm very happy with how the linoleum responds. The letter "A," which in wood may have taken a half hour of eye-straining, finger-mangling work, took just minutes. The ink lays down so evenly (I purposely put lights over darks to see how the ink would behave).

I still love wood, but for reduction printing, my new passion is linoleum. I'll be starting my first "real" print this week. Keep posted!
Posted by Jeff Dean at 6:56 AM No comments:

I have to know. I've fought the good fight; pulled out all the stops, and all other manner of cliches in my quest to perfect the reduction woodcut. But I think I need to get serious about the tools I use.

In the last print, which I call "Untitled" (up all night thinking of that one), I found the same old issues that have been plaguing me for almost fourteen years. I'm just not getting a smooth laydown of ink. I've sanded the wood, and sealed the wood, swore at the wood, oiled the wood, thrown the wood. Hell, maybe it's not the wood at all. Maybe the ink's too stiff. Or too runny, or it's just stupid. The time has come to get serious and rule out the block.

I simply know three things:
1.) I've spent too long trying to figure this out.
2.) Every reduction artist I admire uses linoleum
3.) The next print I post will be my first linoleum block print

I also know that if this doesn't at least help my issues, I'm going to take up performance art. My first piece is "Deranged Former Printer Shotputs His Cas
t Iron Press Through The Wall". Should be fun.
Posted by Jeff Dean at 12:57 PM No comments: 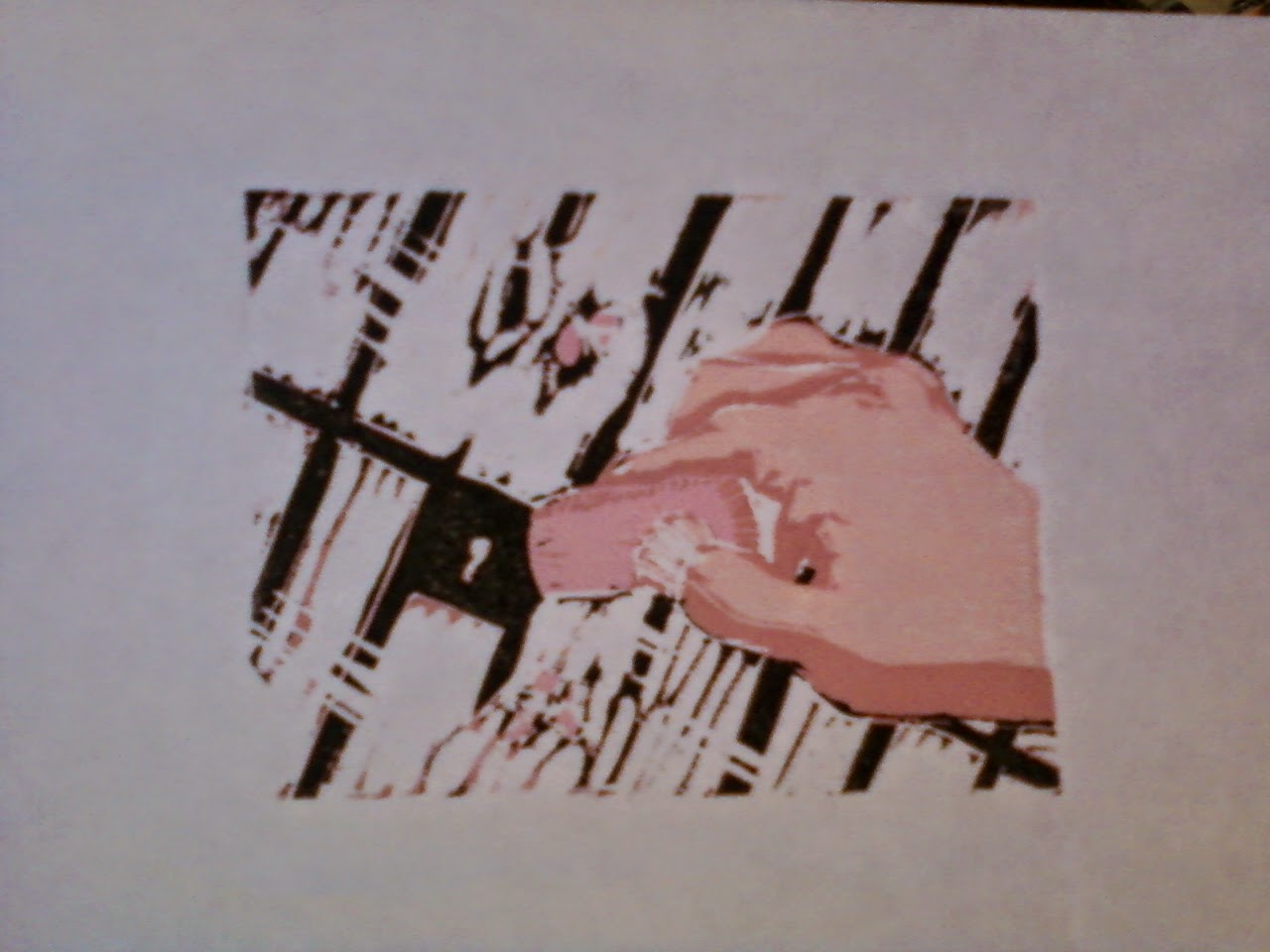 Here is the finished product, 4 colors. 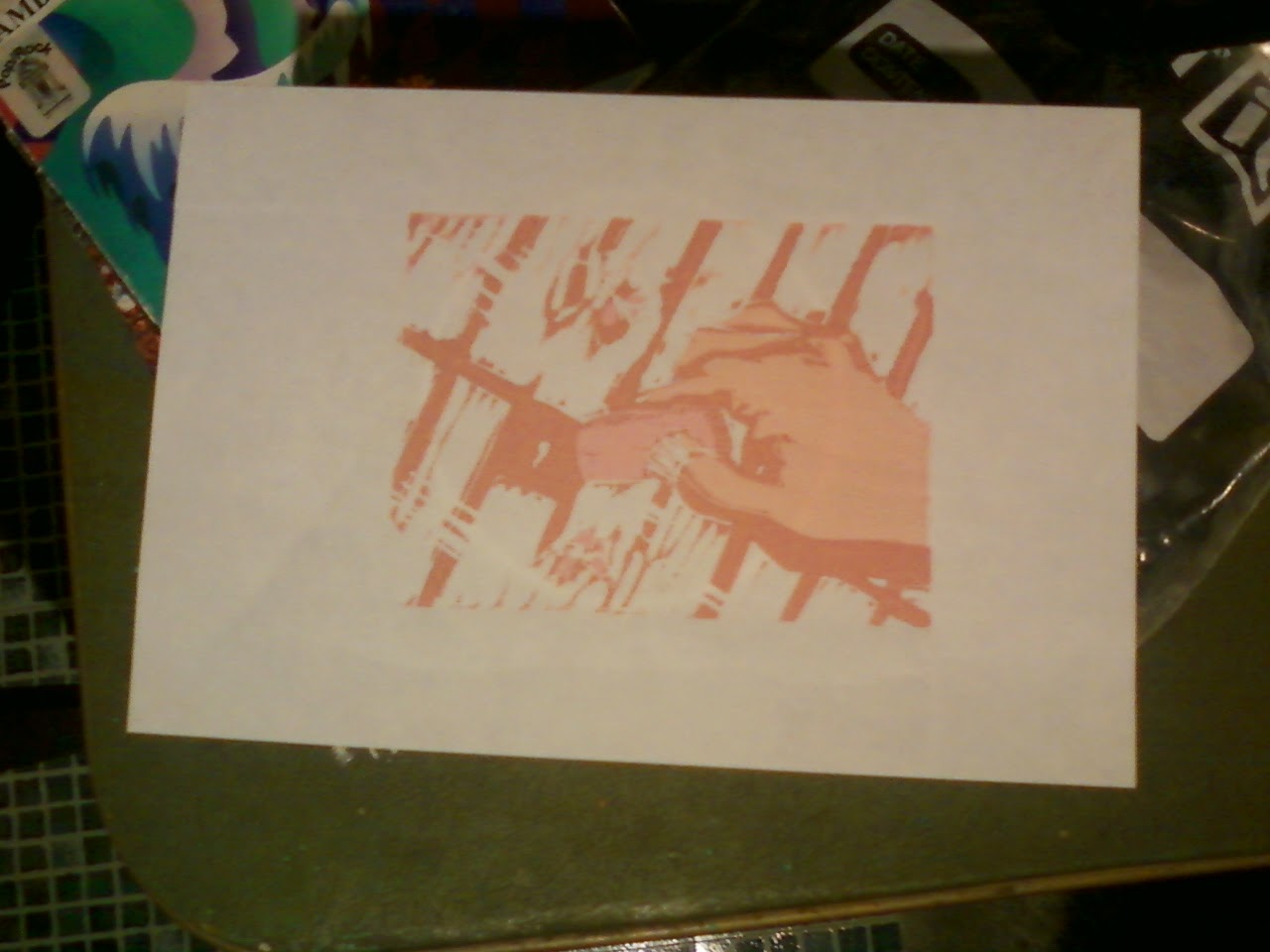 Well, it's been a long winter in Western New York. I have a nice basement in which to work, but from December through April it barely gets above 60 degrees, which makes it pretty uncomfortable (though in July, that's exactly the temp I'd like it to be).

And, as the weather breaks and the heat rises, I get the pull to be down in the studio again. It's always a difficult start. Things run a little rough. I have to rearrange everything that got knocked out of the way during the mad rush to find Christmas decorations.

This year I have a little help. Back in January, when I was dreaming of the end of the most recent Ice Age (we've been 10 days snow free!), I signed up for a print exchange through an online printmakers group I've belonged to for the last dozen years. The deadline is today. 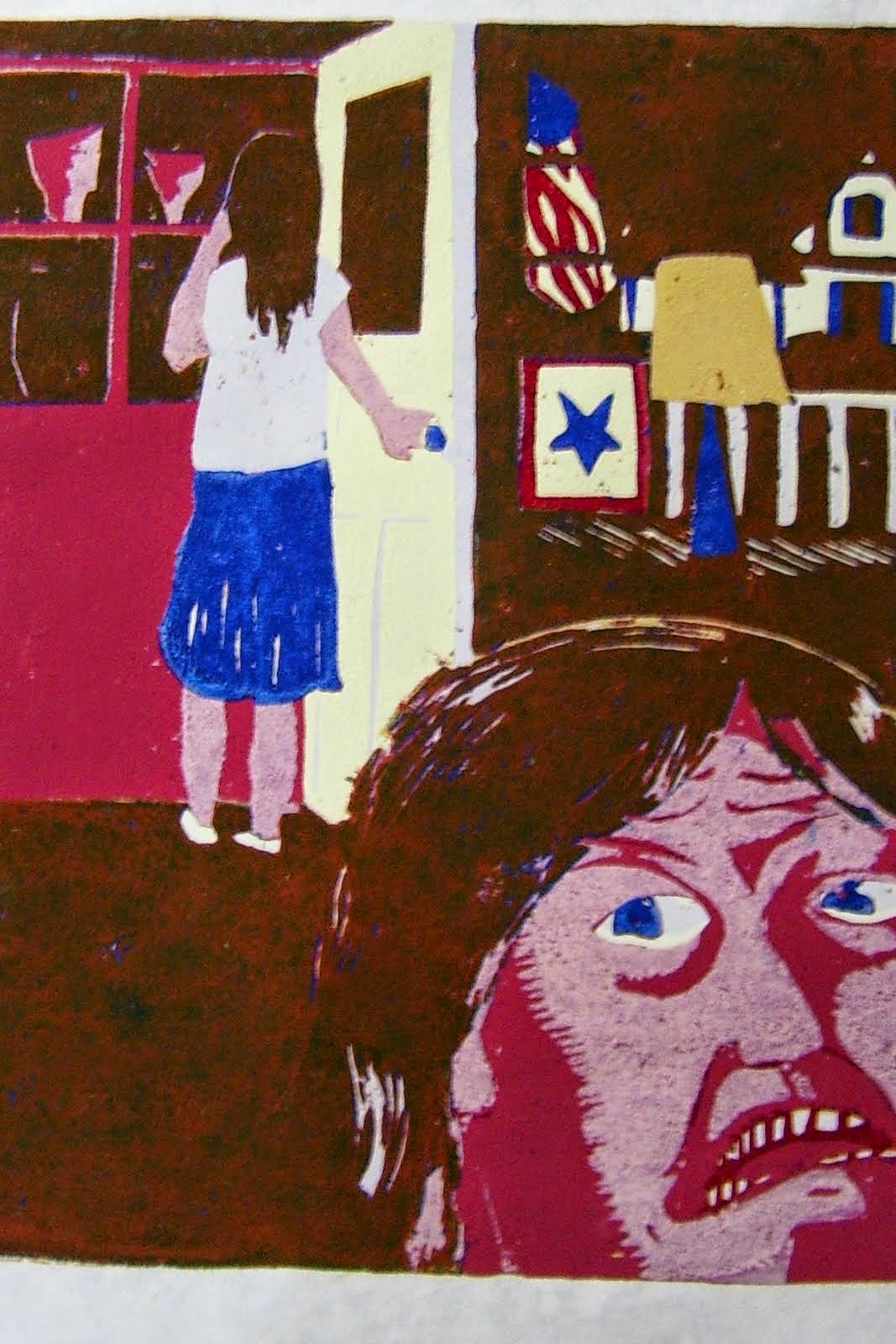 The print above is the third color of an as-yet-untitled print, one of the smallest I've done (not counting the Christmas ornaments from last November) (2.5x3" on a 5x7" piece of paper). The theme for the exchange was "Freedom of Expression." I batted around a few ideas, one which was pretty funny, but risque, and I have an odd sense of humor, so I went safe.

Hmmm. In creating a piece to celebrate freedom of expression, I chose to censor myself. That's very interesting.

Well, don't think too much on it, as I will be tackling that one at some point down the road. Still, the print I have is a pretty important departure for me in many ways. One, it's a pretty full concept piece, something I've attempted only a few times before (The print at right, conceived as a powerful anti-war print, remains unfinished; a planned 16-color beast  from around 2005 that I really wish I'd stuck with, though the little girl in the corner gives me the willies!).

The print above -- my very own left hand, by the way, immortalized in ink! -- demonstrates an artist removing the bars of injustice with an eraser. Pretty simple, gets the point across, I suppose. But wait til you see the naughty one!
Posted by Jeff Dean at 12:53 PM No comments: 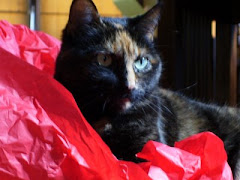